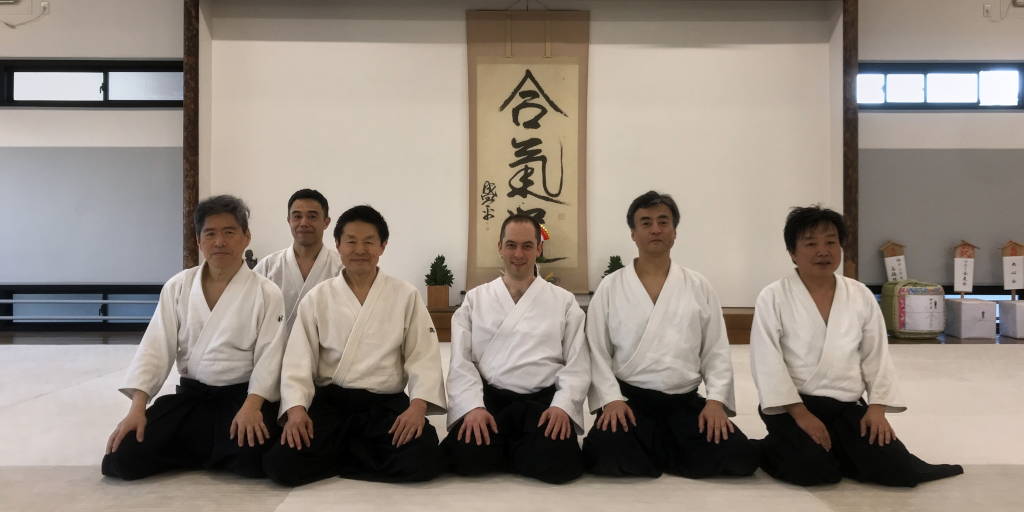 True victory is victory over oneself

The Japanese martial art of aikido affords the possibility to view and manage conflicts from an interesting perspective. The fundamental principles are learned and experienced through physical training. In the process, physical and mental development are intricately linked and mutually dependent. Engaging in the practice of aikido enables one to gain a great deal of valuable insight into how to deal with conflicts, both physical and verbal.

Aikido not only places considerable emphasis on effective defence techniques, but also aims to develop the students mentally and morally. Moral and ethical principles provide a solid foundation.

The main focus of aikido is not to defeat one’s opponent, but to defeat oneself. Consistent practice enables a person to overcome his or her own weaknesses and to bring body and mind into harmony. This also makes it possible to appear peaceful to the outside world and to approach conflicts confidently and in a respectful manner. Violence should never be requited with more violence. True martial arts represent the path of peace and harmony.

Central to all aikido techniques is ki. Ki signifies the life force that is inherent in every being and it is intimately connected to breathing. The word aikido can be translated as the art or the way (do) of aligning or harmonising (ai) life energy (ki). In doing so, the focus is always on overcoming opposites: Fire and water, Yin and Yang, heaven and earth, the masculine and the feminine, inhaling and exhaling, the self and the other are brought into harmony with each other in a creative way. Any disruptions of this sensitive balance lead to chaos, suffering and destruction.

Similarly, mediation is also about overcoming real or perceived opposites by looking at all the aspects and reconciling them in a creative way.

In aikido, ki can be experienced through physical exercises. Relentless training helps students develop an intuitive sense for the invisible force. They are increasingly able to sense what is happening inside their counterparts and they can adapt their own behaviour, their own ki, in response to this. Aikido techniques are most effective where the application of force and one’s own intention are not directed against the force and will of the agressors, but rather flow in the same direction. Strikes to the face are not blocked, but are guided further in the same direction by skilled evasion, causing the agressors to lose their balance and the aggression to flow into the void.

These philosophical principles found in aikido may be transferred from physical combats to verbal conflicts. Ein verbaler Angriff kann kraftvoll abgeblockt und mit einem brutalen „Gegenschlag“ gekontert werden. It is possible to forcefully block a verbal attack and to counter it with a brutal “counterblow”. Another option is to gently evade the attack, to understand what lies behind it, and then to look for arguments that do not oppose the “agressor’s” intention, but that in fact even support it. If I look for answers as to where the aggression is coming from and thus offer solutions that do justice to my counterpart as well as to my own needs and interests, if, in other words, our ki is in harmony and in alignment, then the conflict can be elegantly resolved.

The complex and abstract concept of the centre is of great importance in all Japanese martial arts. It links cosmic, universal elements with individual, human aspects, while also taking into account physical, mental, spiritual and moral factors. Oftentimes human reality is characterised by confusion and suffering – the causes of which lie in human ignorance. As a result, people become destructive towards themselves and towards other people. The quest for the centre of existence provides a way out of this. The process of centring is intended to bring contradictions into harmony and chaos into order. This metaphysical centre can be found in everyone and everything, in the cosmos, in nature and also by each human being within him- or herself. If a person is to find their own centre, in other words, if such a person is to centre themselves, they have to harmonise the disparate aspects of their existence, both internal and external. On the other hand, biased consideration of certain aspects amplifies the imbalance and chaos.

The interplay between inner balance and harmonious relationships, or alternatively between inner turmoil and social conflicts, is particularly relevant when dealing with conflicts, because it illustrates that an interpersonal relationship can only be peaceful and successful if the people involved are at peace with themselves. When people accuse and reproach each other, the origin often lies in inner doubts and fears. In aikido, these fundamental connections can be experienced physically: When an aggressor grips his opponent’s wrist, for example, it is difficult for the latter to free himself from the grip if he tenses up and pulls or pushes uncontrollably. On the other hand, if he manages to relax and sense a weak point in the grip, he can free his hand with almost no effort.

This dynamic is also true for verbal conflicts. A person who, in response to a hostile accusation, retreats with fear or makes angry counter-accusations, for example, will find it difficult to steer the conversation in the right direction. However, someone who first listens attentively and understands what lies behind the accusation can react in a thoughtful and appropriate manner. Japanese martial arts believe that the metaphysical centre is reflected in the middle of the body, that is, in the belly or the lower abdomen. And it is precisely from this centre that ki originates. The lower abdomen, called hara in Japanese, is therefore not only the centre of the body, but also the centre of the entire human existence. Which is why the abdomen features so prominently in all breathing exercises and physical techniques. Relentless physical training, breathing exercises and meditations are methods for centring body and mind and bringing them into harmony with each other, thereby enabling harmonious contact and peaceful coexistence with other people.

Zanshin is a Japanese term that can only be inadequately translated as “remaining mind”. The first character “Zan” means to linger or remain and the second character “Shin” means heart and also soul. Zanshin is a physical and mental state of focused attention after a technique or action is performed. It involves staying connected with one’s counterpart and being prepared for surprises. To achieve this, one’s own feelings must be kept under control and the opponent must be taken into consideration and shown respect. Zanshin calls for not humiliating a defeated opponent and for acceptance of one’s own defeat without any complaint. Zanshin cultivates sympathy and leaves no room for gloating and spitefulness.

Enlightening and revealing parallels can be drawn here with active or empathic listening in mediation, where the attention is focused on the mediator so as to understand and qualify what is being said. It is equally as important not to judge the mediators and to allow them the opportunity to express their feelings honestly. Only in this way is it possible to create a safe space in which the search for consensual solutions can succeed.

One’s own posture and positioning in relation to the opponent are decisive elements in a fight. Only someone who has stability can act in an effective manner without becoming unbalanced. The distance between the opponents deserves special attention. In Japanese martial arts, the term “Ma-ai” is used to describe the proper distance: far enough away so as to be able to respond to any aggression in time, but close enough to remain in contact with the opponent and to be able to use one’s own techniques most effectively. The ability to sense the opponent’s intention and the appropriate reaction to it are crucial: if my opponent moves away from me, then I follow him. If he comes closer, then I move away. If he is circling around me, I turn to face him. This means that I am following my opponent’s intention, but not in order to admit defeat, but rather in order to maintain my own position and retain my ability to act. Aligning oneself with and towards the opponent is not a sign of weakness but is, on the contrary, a basic prerequisite for protecting oneself.

Being able to sense people’s intentions and react accordingly also belongs to a mediator’s repertoire. Posture and positioning can also be of key importance in mediation. Maintaining an upright posture and standing or sitting in a stable position is beneficial because it facilitates breathing, promotes circulation and gives a better overview of what is happening. When mediators consciously use their bodies, for example by clearly turning towards the individual interlocutors and adjusting the distance depending on the situation, they are able to enhance the effect of communication techniques. Just as important, in a figurative sense, is to develop trust and rapport on the one hand, and to maintain a professional distance on the other.

While physical strength and fitness are not negligible, flexibility is of far greater importance in Japanese martial arts. Someone who relies on strength will sooner or later always come up against someone who is stronger, at the very latest as they grow older. Yet flexibility can be improved throughout one’s lifetime, for this not only refers to the body’s pliability, but above all to the ability to flexibly adapt one’s behaviour to the situation at hand. When strength is pitted against strength, bruises and injuries are inevitable – usually on both sides. A person who evades an aggressive force in a flexible way protects himself as well as the aggressor at the same time, and is then able to act from a new position that the aggressor did not anticipate. This redirects the destructive energy that is directed against each other so that it can be dissolved in a gentle way.

Mental flexibility is a prerequisite for physical flexibility. Only someone who enters a confrontation without having any fixed ideas about what to do next can react spontaneously to their opponent. The more we can concentrate on the here and now, the quicker we can gain an understanding of the current conflict situation and our opponent’s intentions, which in turn enables us to react quickly and flexibly. Similarly, when we mediate, we demand that there is an openness to results and a willingness to engage with new ideas. We support mediators in developing flexible solutions.

Martial arts in verbal conflicts and in mediation

Aikido training instils an awareness of the dynamics and fundamental coherences of conflicts. It shows the importance of inner calm, deep breathing and an upright posture, as well as of concentration and mental and physical flexibility. Practitioners of akaido are well aware of how painful it is to react to an attack with rigidity and force, and how effective it can be to first sidestep and then react to the attack from a different angle. The same applies in a verbal conflict. A forceful and aggressive counter-argument can hurt our “opponent’s” feelings, push him into a corner and end up escalating the situation. In such cases, it is often better to first retreat or to avoid the situation. This alleviates the tension and allows for a constructive resolution of the supposed contradictions.